Erin has excelled at 'Play' in her life.  She manages to make every occasion fun, filled with laughter and a great memory for all!!  She wants to sample all of life and loves to experience new things.  Anyone that comes into her orbit will get bathed in some the best that life has to offer.  On this page we will share some of her annual rituals of play and some of her special occasions!! 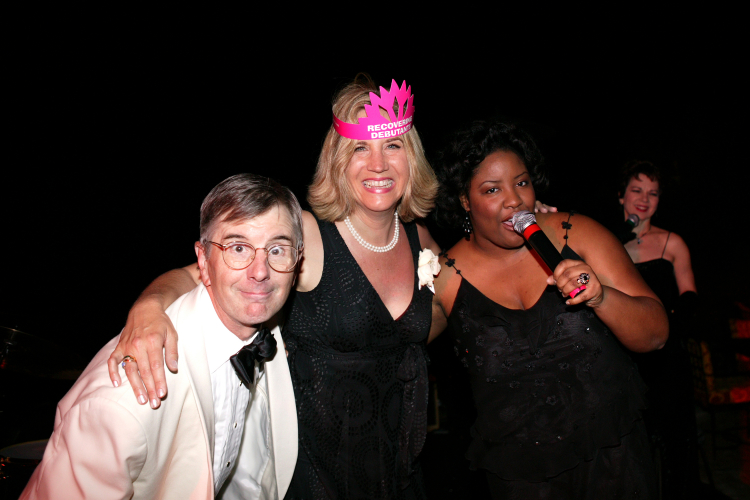 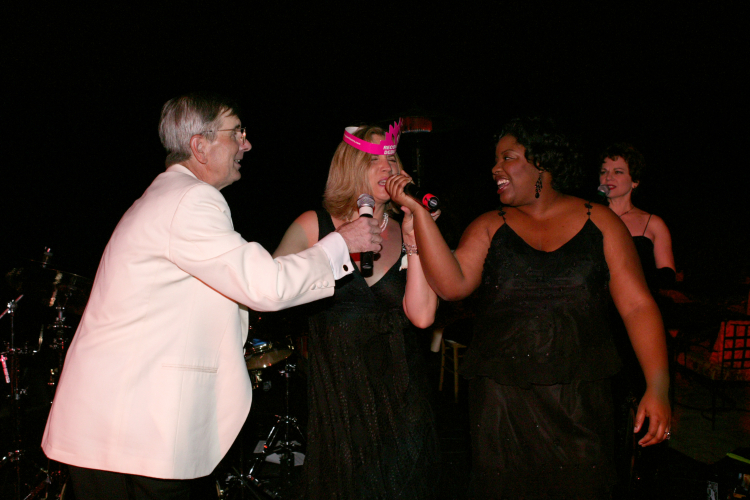 These are the perfect pictures to kick off Erin's PLAY page...

Almost every year, Erin and John attend the Reno Air Races.  They always host a party for their long-standing friends from the world of Aviation. 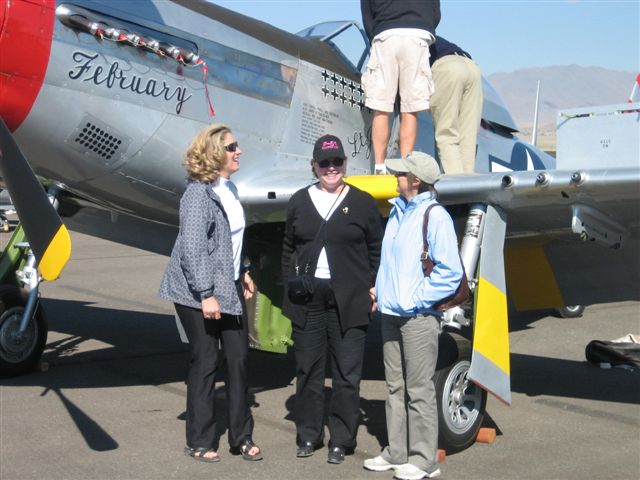 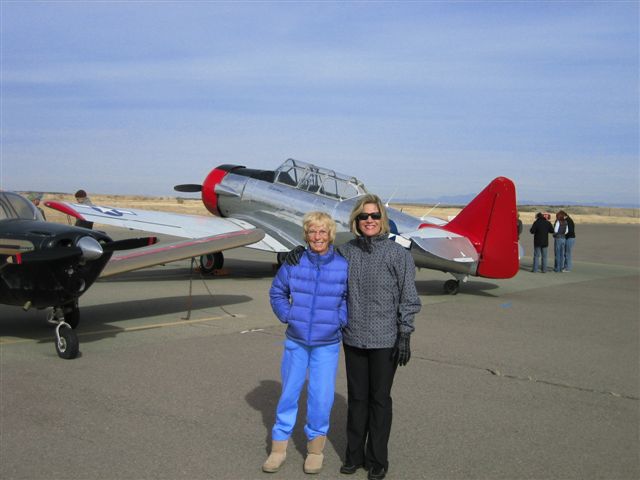 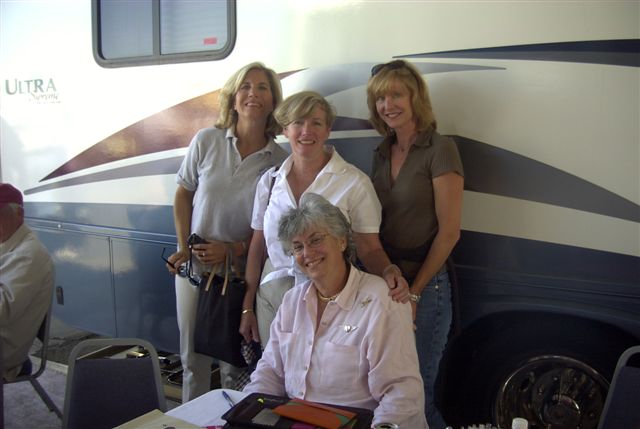 Some of the gang at Reno, Candy Ellis, Molly Ivans, Lisa Somermeier and Erin 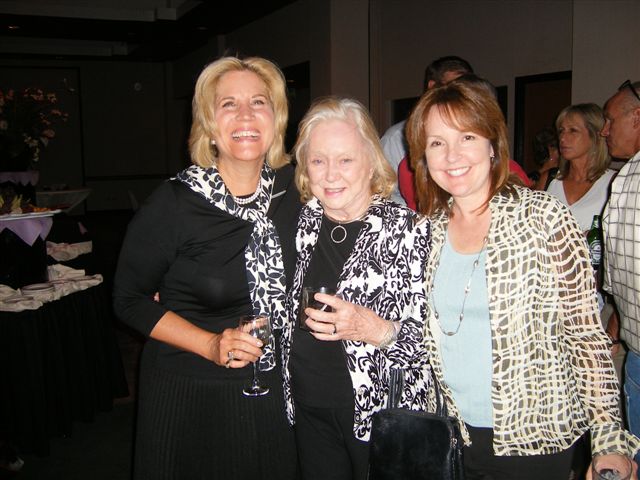 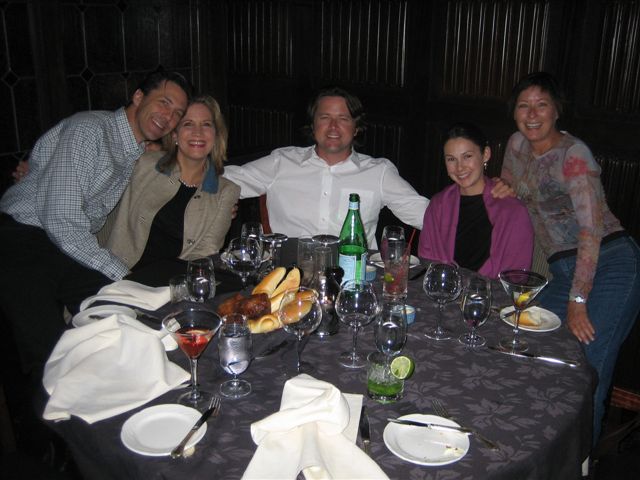 Enjoying the evening with Scott and Annie Woods and LindaSue Brown 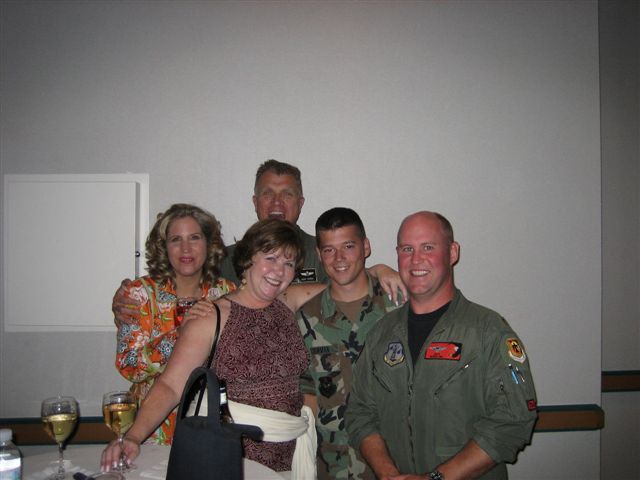 Erin with Denise Daniels, Doc Scro and part of the Demonstration Team for the Air Show 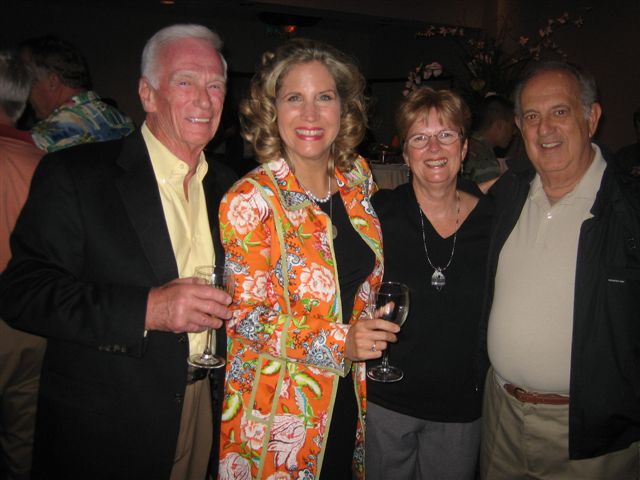 Erin with Gene Cernan, and Hank and Ann Frohlich 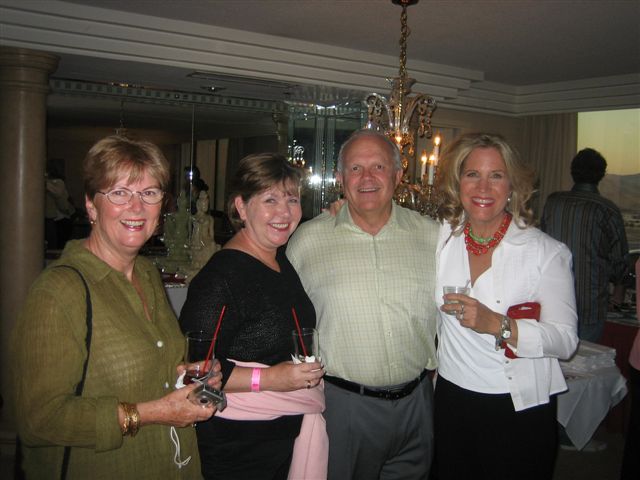 And with Steve Fossett, Denise Daniels and Ann Frohlich at the cocktail party

A number of years ago we started a new tradition of an annual Ladies ski trip.  The group is all friends from Erin's high school days.  After hearing a hilarious story of a rat extermination gone wrong, or better said, too long, she christened the group "The Mutha Rats".  They gather every January in either Vail, CO or Jackson Hole, WY. 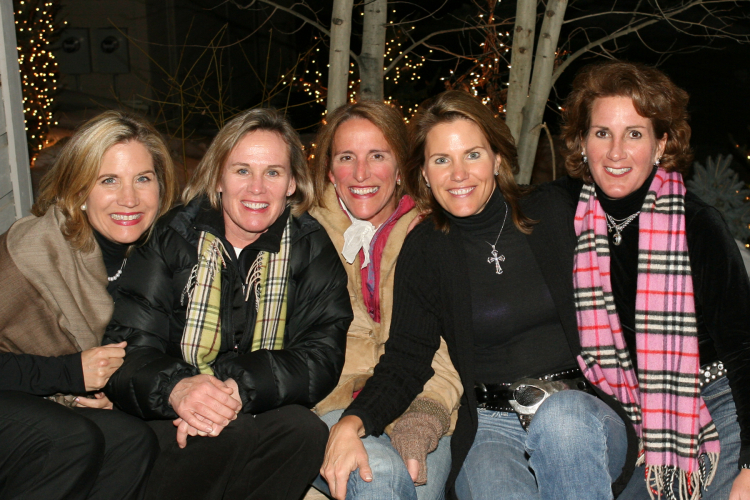 Here are the Muthas enjoying a Big Night Out in Vail 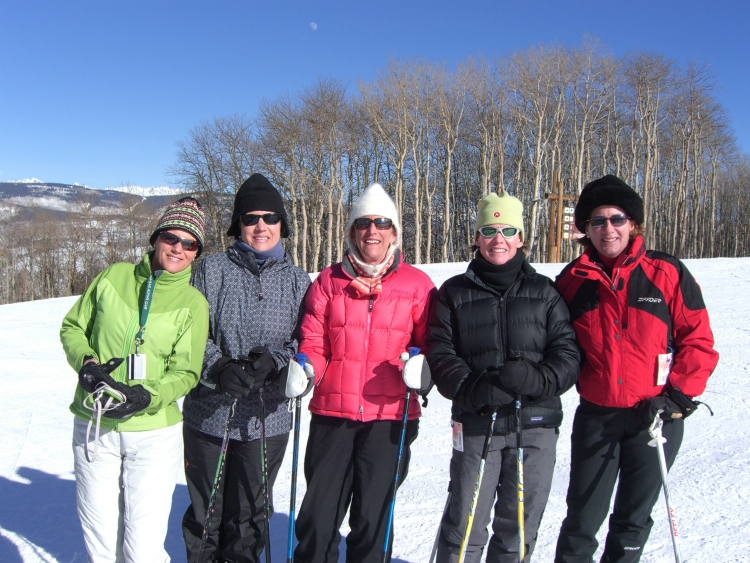 Skiing on a sunny day at the 'The Beav' 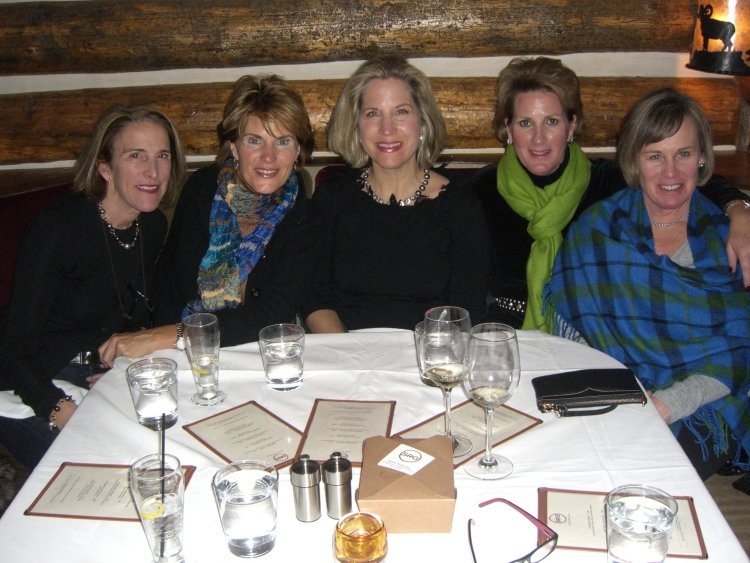 Dinner at the Snake River Grill in Jackson Hole, WY 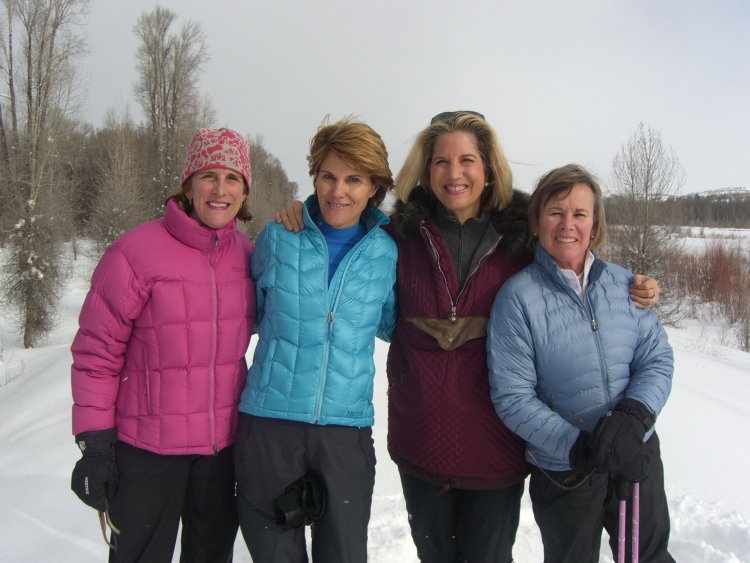 Snowshoeing along the Snake River in Jackson Hole 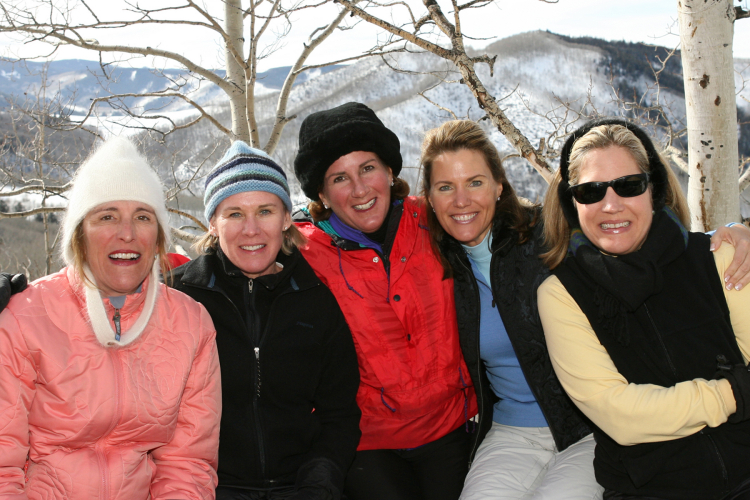 The legend in the world of extermination is that the Mutha Rat is the queen of the Rat universe, and the only way to take every one out is to get the Mutha Rat!!

Next up, a european ski extravaganza for the Muthas!

A few year ago, Erin and John got a fantastic invitation to enjoy a VIP tour aboard the USS Ronald Reagan.  John recounts the story below...

One of the people that attended our annual cocktail party in Reno was a retired Vice Admiral of the Navy. His name is Gerald Hoewing. We met him at an event in Washington DC for Eugene Cernan (last man on the moon) and he was also friends with other people Erin has known. After attending our party in Reno we kept in contact with Jerry and one day I got a call from him inviting us to be Distinguished Visitors on the Reagan – in few weeks. We had to submit our information for security checks and we would be able to go aboard her.

We gathered in San Diego with the other invited guests, we knew a few of them, and had a party the night before. They informed us the Reagan was out to sea on training, at an undisclosed location, and we’d be flown out to her and have a “Trap” landing. We had to arrive at the base early to train for the flight and emergency procedures in case of a water landing. We were flown out the ship and successfully completed our first “Trap” landing (hence the trap badge). The transport company gave us their badge and challenge coin.

Once aboard we found the captain was from Minnesota. Upon the day and night tour we had of the ship, including seeing takeoff and landings and many, many meals, we grouped again in the captains briefing room. He gave “the people from Minnesota”  his challenge coin (which is larger) which is a great honor. The coins are used as a challenge. You challenge any naval person to put their coin down. The largest coin wins (usually drinks).

We then boarded the transport plane for a catapult launch return flight. It was all thrilling. And exhausting. Those sailors work hard. 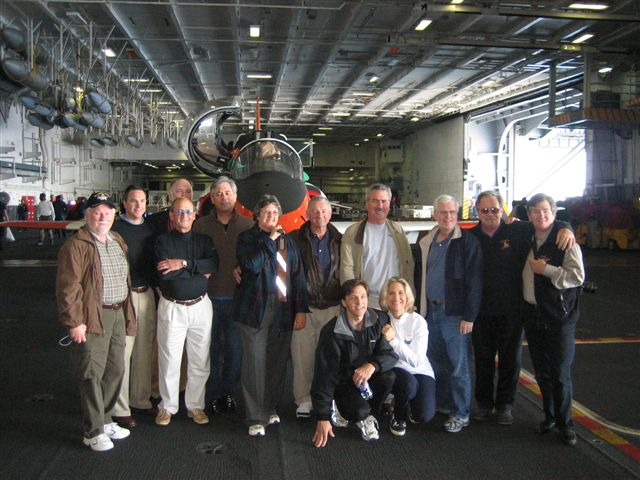 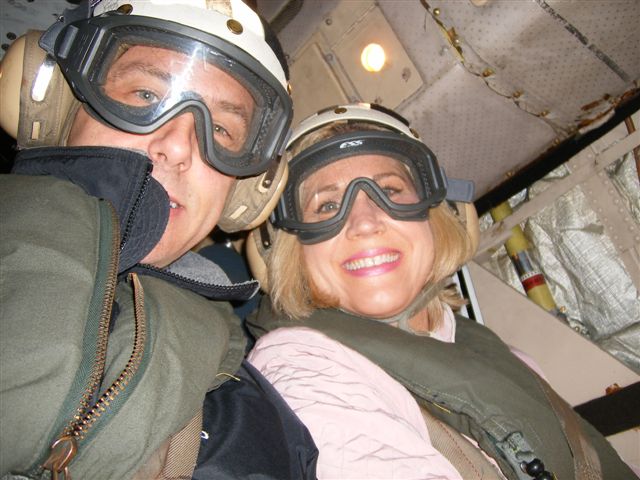 Here they are about to do a 'trap landing'!! 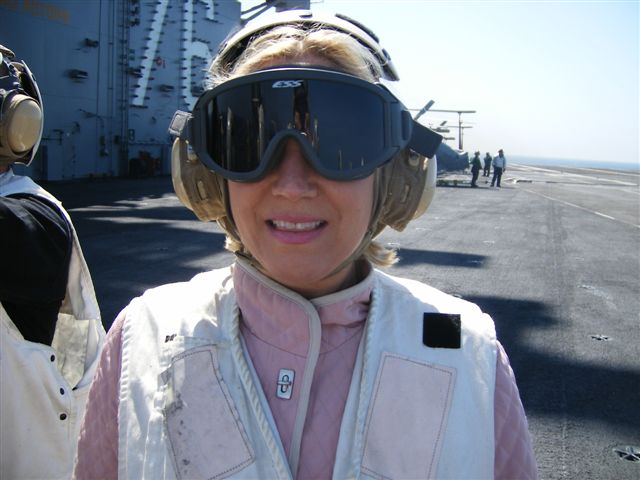 Erin on the deck of the USS Ronald Reagan wearing her gear. 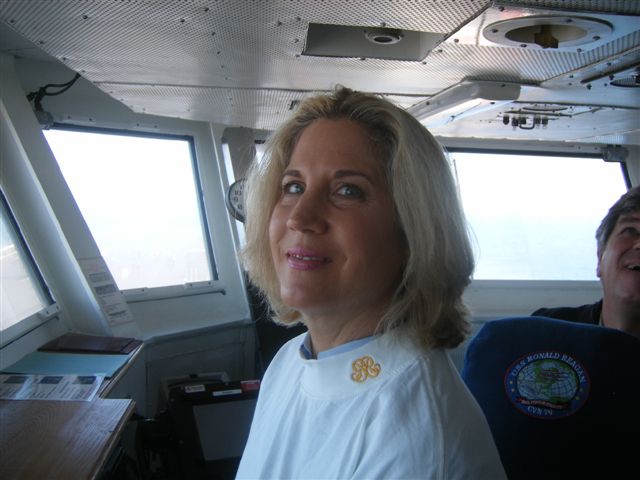 Erin in the Admiral's Deck of the aircraft carrier 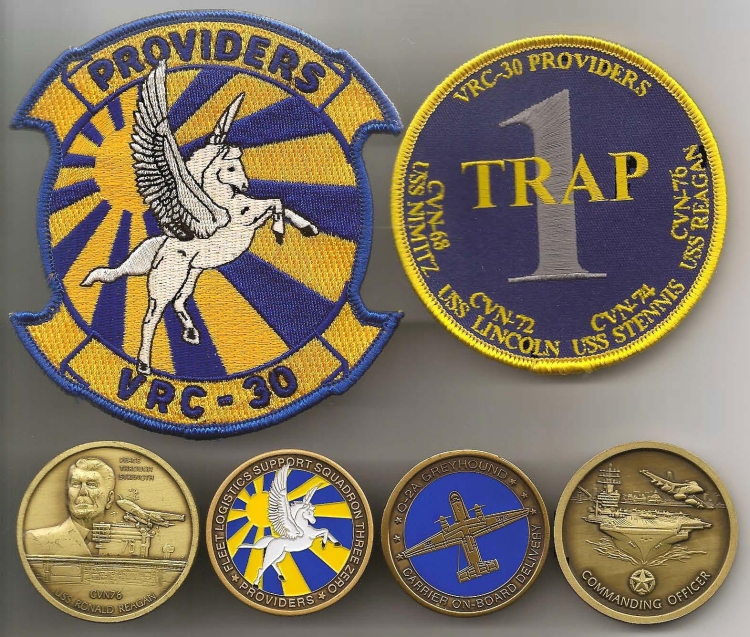 These are the badges and coins they collected during the amazing experience aboard the USS Ronald Reagan. 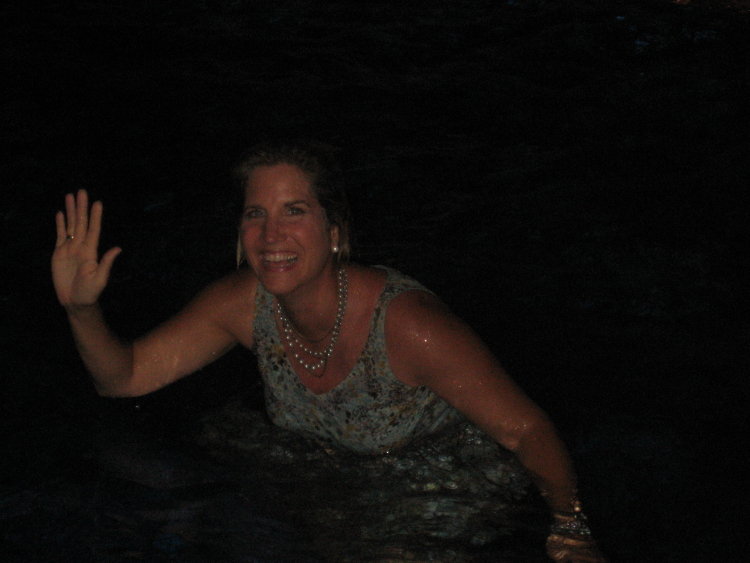 Of course, Erin was the first one in the pool (in her party dress)